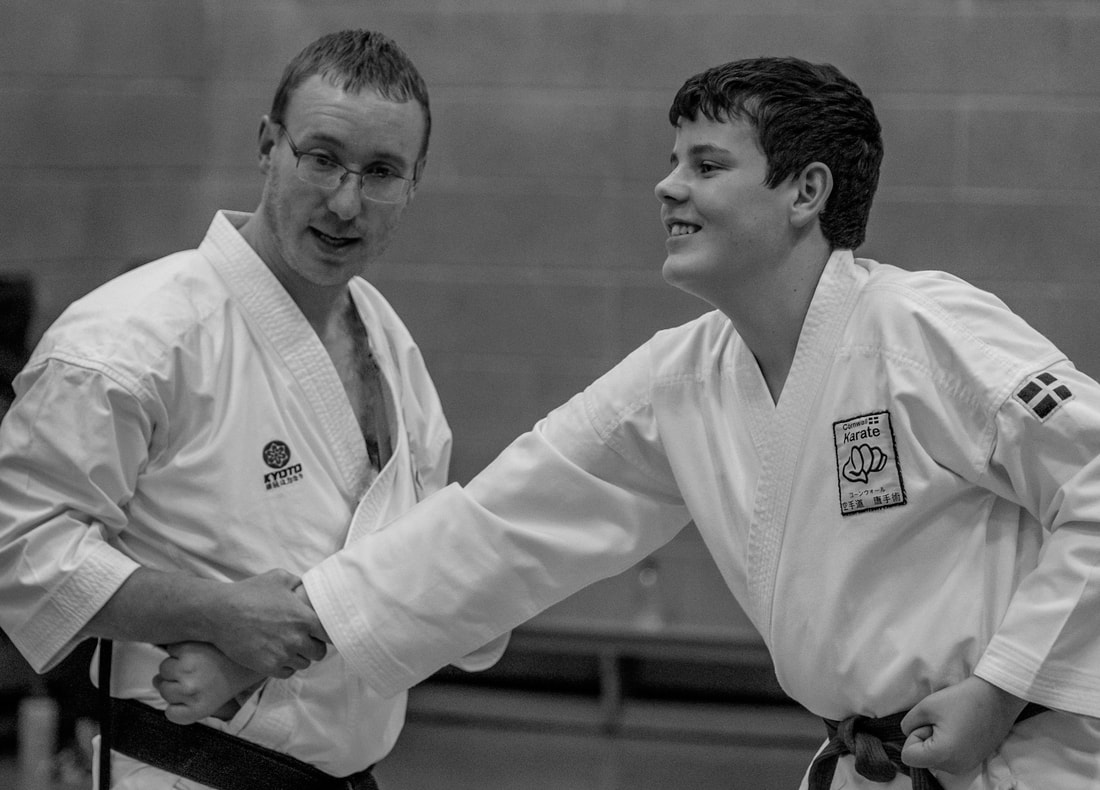 Sensei Kevin is the Chief Instructor of Cornwall Karate, having founded the group in 2005 after moving to Cornwall. He is well known for his personable teaching style, his love of Kata and the analysis (bunkai) of its many applications (oyo), and for his enjoyment of hitting impact pads!

We asked him to tell us about his background in Karate, and here is what he wrote:
"I grew up in Exeter, Devon. My first memory of the martial arts was when my Dad introduced me to "Monkey", a Japanese TV series. It was poorly dubbed into English and had some strange storylines, but also had exciting martial art moves, which more-than made-up for it! After watching it, I desperately wanted to learn martial arts, but didn't know of any classes nearby. Back then, there was no Google, so unless you were lucky enough to get a leaflet through your door or hear about classes by word of mouth, you'd never know if (or where) classes existed.

As luck would have it (or not, as the case ended up being), a school friend joined a Karate club on the other side of Exeter, and he and his parents asked if I'd like to go along with him to try the classes. I didn't need to be asked twice; of course I would! So, off we went, but I'm sorry to say I didn't enjoy the class at all. I was sent to one side of the dojo with an older child being left to teach me. He taught from a printed syllabus in a folder, which he had to constantly refer to, as he didn't seem to know much either! Despite my age, I knew something seemed "off" about using a child to teach another child (me) for a whole class. All I did that evening was run through different ways of standing (stances) over and over again, which I was very disappointed with - I wasn't the "instant ninja" I'd hoped to be! Consequently, I declined the chance to go back the following week... I still yearned to learn a martial art, but knew that this wasn't the club for me.

I then found out about a Karate club more local to me, this one being within walking distance. That was the good news. The bad news was that I'd heard worrying stories about the instructors beating up the students (almost certainly not true!) and making them lay on the floor so the instructor could run across their stomachs to strengthen their stomach muscles (definitely true!). I did venture to the building where they trained with a view to enquiring about classes, but as a shy young lad I got no further than the reception desk, and used the fact that I wasn't greeted immediately to claim that they obviously weren't very friendly, and so decided it also wasn't the right club for me!

When I was a little older, our family home was burgled one night while we were all asleep, and it made me worried about what would have happened if the burglars had tried to hurt any of us. As it turned out, the burglars did us a favour, as my Dad bought a new Phillips V2000 video recorder with the insurance money! Video rentals were a big thing back then (nope, not only was Google not around, neither was Netflix!), but with V2000 being a new and non-standard video format (my Dad has a habit of buying technology that doesn't really take off!) the local video shop hardly had any videos for it... EXCEPT for loads of dubbed Kung Fu movies. I was in heaven!

Shortly after, my Dad mentioned one morning that he had recorded a film called "Enter the Dragon" off the TV, and thought I would like it. What can I say... Bruce Lee's skill blew me away, and once again I started nagging my parents to take me to martial art classes, only this time I wanted to learn "Kung Fu" like Bruce Lee!

My Dad took me along to the local leisure centre, where I had previously seen Kung Fu classes advertised on a poster. As we were going through the reception area, a lady stopped us and asked if we were "looking for the karate" (the lovely lady turned out to be the Karate instructor's wife). My Dad replied "yes" while I tried to correct him that it was Kung Fu I wanted to do, and we were directed to a balcony area where there were a group of people being taught Karate by a man who was small in stature but great in skill - Philip Nicholls Sensei. It turned out that my Dad knew Philip Sensei through work (to this day, I'm not sure if it was "planned" that I went to his Karate classes, or just fate), but I was immediately made to feel welcome by him, and the fact that a man not much bigger than me could look so awesome at doing Karate made me hopeful that I could be like him one day.

I enjoyed Karate so much that I was training as much as I possibly could. Even when I became more proficient and told I could move up to a more advanced class, I would still join-in with the beginner classes to practice my basic techniques, then stay-on to train in the advanced class as well. I would also practice at home every spare minute that I could find. I was over the moon when, 4 1/2 years after first starting Karate, I achieved my 1st Dan Black Belt.

Time went on... I went to university... got a job... then I met Rachel who I knew I wanted to spend the rest of my life with. There was just one problem... she was from Cornwall and wanted to move back there after she was made redundant in Exeter, so we upped-sticks and moved to Penzance. By now, I knew that working in Local Government as an Environmental Health Officer wasn't for me, so I used the money I had from selling my house when we moved to Cornwall to setup a Karate club! Luckily, Rachel supported me in my decision to leave my stable, well-paid job, and all was good (if financially poorer!).

As time went on, my little Karate club started to become well-known locally, and started to grow quickly. Unfortunately, being down in Penzance put us out on a limb geographically-speaking, and I felt very isolated from the Karate association we were a part of. Not having regular contact with a more senior Karate instructor meant I was also having to analyse things myself much more, rather than having somebody to ask questions and be spoon-fed answers. Through my own studies and practice, I felt I was forming views and concepts about Karate which contradicted those of the rest of my Karate association. At that stage, I made the decision to go "independent" and setup a standalone Karate group which I named, simply, Cornwall Karate.

Since then, I've been lucky enough to continue to develop my own ideas about Karate through critical thinking, hard work and lots of experience training with other Karate practitioners. During my Karate career, I've been lucky enough to learn from some amazing martial artists such as Philip Nicholls Sensei, Eddie Daniels Sensei, Tom Beardsley Sensei, Miguel Fernández Vázquez Sensei, Alan Ruddock Sensei, Damian Bowen Sensei, Alan Platt Sensei, and Iain Abernethy Sensei.