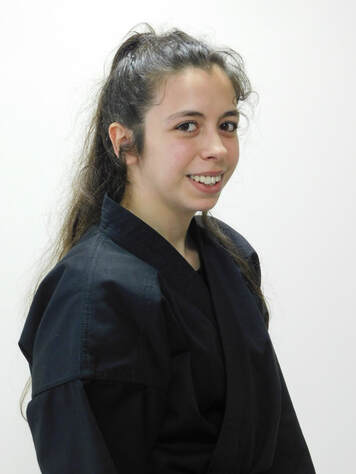 Annie Thomas Sensei first started training with us in January 2006 as a shy almost-8yr old!

She passed her 1st Dan Black Belt grading with us in November 2019, almost 14 years later.

Why so long? If you read Annie Sensei's story below, all will make sense, but it's clear that through adversity, greatness is sometimes forged.

Annie is an amazing, well-rounded martial artist that works exceptionally hard to excel at anything she turns her hand to. She is loved and respected by our students and instructors alike.

We asked Annie Sensei to tell us about her background in Karate, and here is what she wrote:
"Through all the twists and turns that life throws at you, practising Karate has always given me a focus that has changed my life for the better in so many ways, and improved my self belief no end.

I’ve struggled a lot with my mental and physical health all my life, and karate is my escape. It’s taught me to listen to my body and to better understand my mind.

As a young child, I went to lots of after school clubs and some of my earliest memories are of ballet, and karate lessons at Cornwall Karate. I quickly realised that ballet wasn’t for me as I’m not the graceful type, but karate has been the one thing I’ve always stuck with and been hugely passionate about.

I loved Kevin Sensei’s lessons immediately and despite experiencing high levels of anxiety before almost every lesson, by the time Mum and Dad came to pick me up I was buzzing with excitement and was always keen to show them everything we learned that day.

When my parents first saw that there were karate classes in the area, they thought it would be good for me to learn some self defence in the hope that it would give me more confidence in myself and that they wouldn’t have to worry so much once I was old enough to go out clubbing with my friends.

As it turns out, I don’t do much clubbing as I’m usually either practising karate, walking my dog or out in a boat somewhere! But I have made some amazing and inspiring friends along the way, including my fellow Sensei’s and students at Cornwall Karate.

I was always the shy, quiet one of any group when I was growing up. Back then, I would never have believed that I could achieve anything like a black belt, let alone being able to stand up in front of the class and teach!

In 2011, I moved from Newlyn to the north of Cornwall which meant i had to stop attending classes with Cornwall Karate. However, I was thrilled to find that there was another karate club nearby. I joined straight away and was fascinated to learn a different style of karate, Wadokai. I achieved my brown belt (1st kyu) but unfortunately had to put training on hold due to a chronic illness.

By the time I was well again, I had moved back down the county a bit, and attended the local karate club that had started up at my school (Doryoku Ryu) which I also enjoyed and graded up to a 3rd kyu brown belt. Unfortunately, illness held me back once more, and I was forced to stop training.

Over the next several years I found any excuse to train whenever I was well enough, wherever I found myself and in whichever martial art it happened to be. I’ve been lucky enough to train in France, Spain and India as well as many places around the UK under many very talented Sensei. I tried my hand at Tang Soo Do, Ju-jitsu, MMA, Kendo, Aikido, Tai Chi and various types of weapons training. I’ve gained quite a bit of experience in competitions, but nowadays I prefer to focus on more practical self defence and keep the sporting side of things just for fun!

Ultimately, I came back to my roots and was finally able to resume training at Cornwall Karate. It was one of the best days of my life when I was awarded my 1st Dan in 2019, despite struggling with my mental health, ongoing illnesses and being diagnosed with cancer in 2016.

I’m now well on my way through recovery. I enjoy karate more than ever, especially being able to teach it too, in the club I’ve always felt most 'at home' in.

As I continue through my journey, I hope to inspire other girls (and boys) to take up a martial art and to help people feel safer, healthier and more positive in their daily lives through the fascinating and infinite art of Karate."
GRADING HISTORY
1st Dan Black Belt - 10/11/2019 (Graded by Damien Bowen Sensei, Kevin Cooke Sensei and Lorraine Smith Sensei) 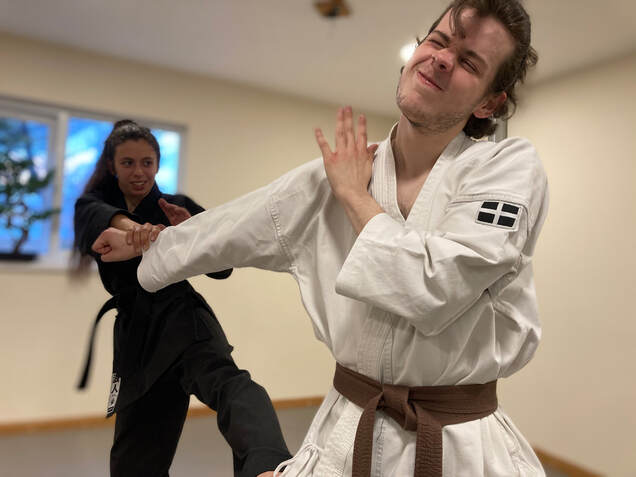 Annie Thomas Sensei demonstrates a low side kick on one of our advanced students.
Go Back